The Bondi Tram… The photo below is of an electric tram in Bondi. This might bring back a few memories for any more senior readers but for most this might as well have been a 100 years ago. The article to follow is courtesy of Waverley, February, 1994. We gratefully acknowledge extracts from “The Eastern Lines of the Sydney Tramway
System” by David R Keenan.

Here at Tram Scrolls Australia we offer a mssive range of unique tram and bus destination scrolls with at least one for every major city in Australia, we have 5 for Sydney, 4 for Brisbane, 4 for Melbourne and the list goes on…We also offer a number of International destinations such as London stops, Paris routes, Belfast destinations and even New York Subway stops.

We take care to keep the look of our tram scrolls as close to the original as possible, check out our full range….  http://www.tramscrolls.com.au/ 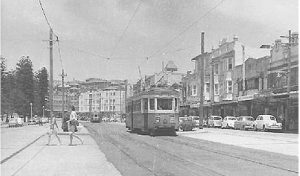 One hundred years ago the tram line was extended from the Bondi Aquarium terminus
at Fletcher Street to a balloon loop at the southern of Bondi Beach. Early morning tram
journeys were particularly popular with bathers, as it was then forbidden to swim at
Bondi Beach between the hours of 8 a.m. and 8 p.m.
Those were the days when steam tram motors hauled two passenger cars and supplies
of coke and water were obtained at various points along the line. On wet days an
additional car was attached to cater for extra passengers, as the rain turned dirt roads
to mud and made travel by horse-drawn vehicles difficult.
The steam trams used an “old shrieking whistle”, made “nerve-shattering noises” and
caused “earth tremors” and “hurricanes of dust” in warm weather, much to the
annoyance of pedestrians and shopkeepers. They rejoiced at the introduction of clean
electric trams.
The new electric tram services to Bondi Beach began on October 19, 1902, even though
there was only a three-inch clearance beneath the Bondi Road overbridge. This
situation was eased the following year when the track was lowered under the bridge.
1905 saw the Bondi line chosen as a destination for the new tourist tram service and
the first of a number of moonlight excursions.
The Bondi and North Bondi surf life saving clubs were established in 1906, by which
time bathing restrictions had been removed, and the popularity of surf bathing led to
improved summer Sunday services.
Destination signs with coloured symbols evolved from the days of steam trams. The
Bondi Beach sign was white with a red centre, and “Bondi” printed in white on a black
background.
The first of the popular O class trams entered service on the Bondi and Waverley lines
in March 1908 and they were in general use by 1911. Nicknamed “rattlers” and “toastrack”
trams, they successfully carried passengers until 1957 and are remembered with
nostalgic affection.
The conductor on the running boards crying “fez pliz”,
The segregated smoking sections, usually occupied by men.
The canvas blind which was pulled down to keep out the rain.
Straphangers jostling for seats as passengers departed.
The paper boys who jumped on and off calling “payur”.
The Bondi tram loop was demolished as part of Waverley Council’s Bondi Improvement
Scheme in the 1920’s and the trams rerouted along Campbell Parade to a new terminus
at North Bondi, the site still used today by the buses.
Another tram route reached Bondi Beach via Curlewis Street. This was an extension of
the Bellevue Hill line which relieved congestion along Oxford Street. The official
opening, which took place on Saturday, December, 19, 1914, was performed by the
Minister for Public Works. A second ribbon was cut by Mrs Joseph Barracluff, wife of the
Mayor of Waverley, when the tram reached the Waverley boundary. The Bondi via
Bellevue Hill line received a priority allocation of the new corridor R class trams in 1933.
The last Bondi tram to “shoot through” was during the early hours of Sunday, February
18, 1960. The R class corridor tram was crammed with last-tram riders and had a
boisterous journey. It left Bondi at 3.30 a.m. and arrived at the Dowling Street depot
minus most light globes, some handrails, all upholstered seat cushions, the lifting jack,
a headlight glass and all destination rolls.
Once the favourite mode of transport, only the memory remains of when you could
“Shoot through like a Bondi tram”.