The history of the tram

The history of the tram

The history of the tram is quite amazing to track. History says that the first trams were drawn by horses in South Wales in the United Kingdom. The tram service was affectionately known as the Mumbles Railway. With the success of this new concept they progressively spread across to other cities within the UK.The next instance of a regular line was created in the United States where they soon took off. 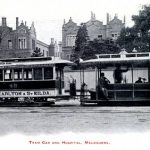 The precursor to the modern trams was formed around the year 1832. This was started in New York and after the success of the tram, it was also started in other places including New Orleans. The Electrical engines were started to be used the trams with the use of power lines. This was started in the year 1884 in Brighton in England. This can be said to be the best service at that time and was the first instance of a tram that ran on a specified line.

In 1885, the first kind of electric tram that ran on the street was started. This tram in Blackppol, England was unimaginatively called the Blackpool tramway. It is amazingly still operational today considering the fact that it has been more than a century and a half since it was first started.

After this, there were a lot of countries that started using trams as a method of transporting people. Places like Budapest and other parts of Europe started having their system of tram that started becoming more and more popular. With time, this became one of the best and cheapest methods of traveling from one place to another.

Initially, the trams had rails that were on the surface of the road. Since people used to walk on the roads, the accidents that occurred increased. To overcome this problem, a new system of rail was introduced. In this, there were grooved rails that were laid for the trams and they did not hinder the movement of other vehicles or people who were on their feet. The use of electricity to power the trams was the first modern shift from the traditional methods. This has made the trams to grow in size and stature over the years. These days, the evolution seems to be complete with the trams these days being much sleeker and have good functionality. Many cities are now looking to revert back to tram systems after a lot were replaced with what at the time was perceived as superior rail service.

It is worth mentioning that the tram and bus sign art sold on this site is based on the tram and bus signs from around the 1940s onwards where they has long black bus and tram blinds with the distinct white lettering. It was only a matter of time before these pieces of history became desirable artworks.